This seasons winter nets commence on Saturday 5th February until Saturday 9th April at Judd School, Brook Street, Tonbridge between 4:30 – 6:00pm. All are welcome, we have four nets…

Apologies for the late notice but this Friday 10th December the club bar will be open for our Christmas drinks. Please come up and enjoy a festive drink.

As some of you will be aware, we have had a Covid scare this week. One of our members has tested positive and I am sure you will join me…

The jack pot for the golden ball now stands at £275 for the draw on 11th July. If you wish to buy tickets please Chop or ask at the bar.…

On Sunday 6th June the draw was made for the Euro 2020 sweepstake. Names and teams were both drawn with the results below. The winner will recieve £100 and second…

The golden ball draw on the 30th May was won by Alex and he received a bottle of gin. Unfortunately for Alex he did not draw the golden ball so…

On Sunday afternoon the second golden ball raffle was drawn and for the second week in a row Paul Gammge won the raffle. As Paul was not present it fell…

On Friday evening the first golden ball draw took place. The raffle was won by Paul Gammage who then had a chance to draw the golden ball. Paul drew a white…

2022 fixtures will be added to this site soon. Please check back in the near future.

Please have a look on our news page for all upcoming events. 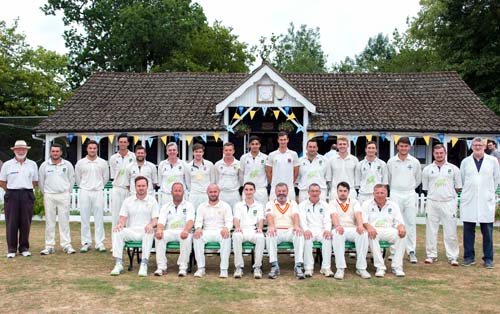 Cricket at Four Elms celebrated 150 years in 2018 and whilst the game, equipment, quality of facilities and players have changed in many ways over time, the commitment to the club from those who play today is as constant as is our beautiful ground and its superb vista. The picturesque village ground of Four Elms nestles beneath the North Downs, close to some of the most historic attractions in England, Chartwell, Sir Winston Churchill's home, Hever Castle, the childhood home of Henry VIII's wife, Anne Boleyn and Penshurst Place.

We have featured as the backdrop for advertising campaigns, Vauxhall cars and for a television series on the history of Great Britain. We have played host to an MCC side in 1968, our centenary, and the MCC will join us again this year to celebrate another 50 years. We have hosted a number of county senior matches as well as a highly successful and enjoyable celebrity game between Tom Graveney's XI and Colin Milburn's XI.

The earliest records available indicate that cricket was played at Four Elms from 1864 with the club officially forming in 1868. The original ground was on Lord Bramwell's fields, Holmwood, adjoining the cabbage field on the site that is now Boons Estate. It moved, via Four Elms Farm "near the nurses cottage", to its present site in about 1890 when the current pavilion was built opposite St Paul's Church and close to the Four Elms Pub which occupies a 14th century building. 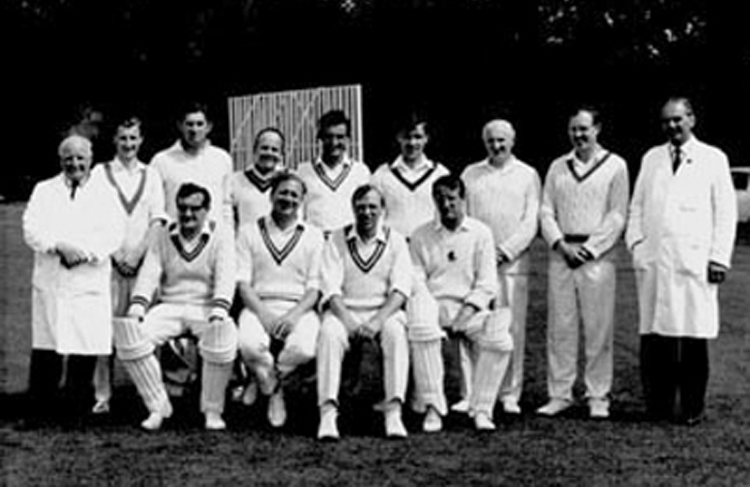 The pavilion was extensively damaged during the Second World War when a Doodle Bug landed on the ground and numerous club records were lost. After the war the pavilion was rebuilt and running water and flushing toilets were added. In the following years the size of the pavilion was increased left and right by 'one bay each end', and cesspit drainage was improved. An extension incorporated shower facilities/changing rooms was built which allowed the 'entertaining' area to be enlarged and the bar and kitchen to be redesigned with a view over the ground. The pavilion is a real 'Old Grandmother' of a building deeply loved and respected by the members, barring the occasional wayward cricket ball or bat! All of these changes have been carried out by members or friends thereof, and are all done for the best interests of the club and its future.

The ground and square have improved greatly over the years. The square has gone from being low-slow to something a little more virile, albeit not Perth on day 2! Modern machinery and current technology have a lot to do with the quality we have today but ultimately the time, care and the amount of work that goes into the square and outfield from members is as strong as it was fifty, a hundred and a hundred and fifty years ago. From reading back through the old records the care of the ground has always been a labour of love and commitment. You argue, love, laugh and cry over it but, ultimately, you put in the effort to get the best out for all.</p?

Since 1868 one thing that certainly hasn't changed is the commitment of the players and their personalities! Currently we are fortunate enough to run two Saturday sides and one Sunday side, manned with the flotsam and jetsam of current society, solicitors, osteopaths, builders, taxi drivers, printers, butchers, policemen et al, who all come together to form strong and lifelong friendships in the pursuit of a game of cricket and playing together as a team. 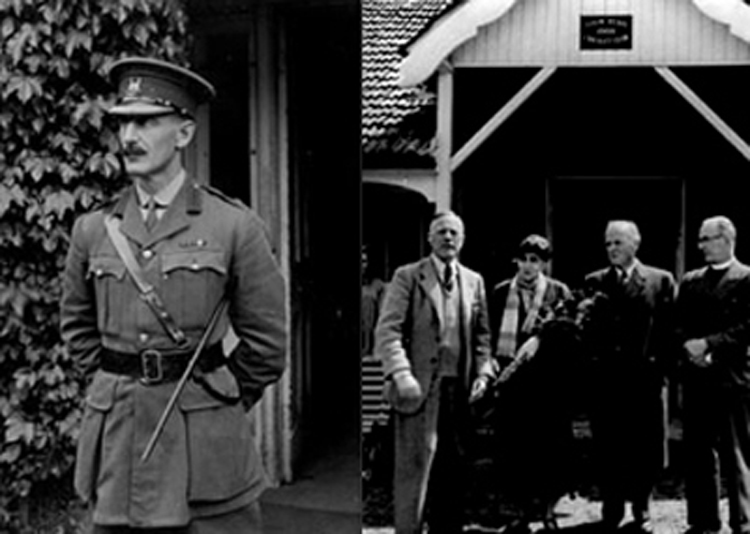 We have been fortunate to have many strong cricketers over the years many of whom can be seen in the photographs in the club house and have been remembered with commemorative benches and trees around the ground. The Cartwright brothers dominated sides through the 40's, 50's and 60's. Season's 1957and 1958 saw Frank Cartwright claim 205 and 213 wickets respectively, as well as scoring 991 and 1113 runs with his bat. Have better all-round stats been seen? Fellow bowlers clearly didn't get much of a look in as Frank claimed 23 five wicket hauls and one 10 wicket haul in 1957; his brother, Doddy, was no slouch with bat or ball either. Cecil French, Henry Knight and Colin Trigg all chipped in with decent wickets and runs. From conversations with senior members who new Frank and Doddy, they were incredibly consistent performers. No surprise the brothers used to prepare the wickets back then ensuring they were just as they liked them!

The 60's saw the Cartwrights still performing well but other names made significant contributions, the likes of Dennis Keating, Mike Clapp, Barry Rees, Adrian Greenwood, Mike Sleeman, John Bennett, Lawrence Wilson, Graham Larby and Peter Rylands all made the limelight in many games. 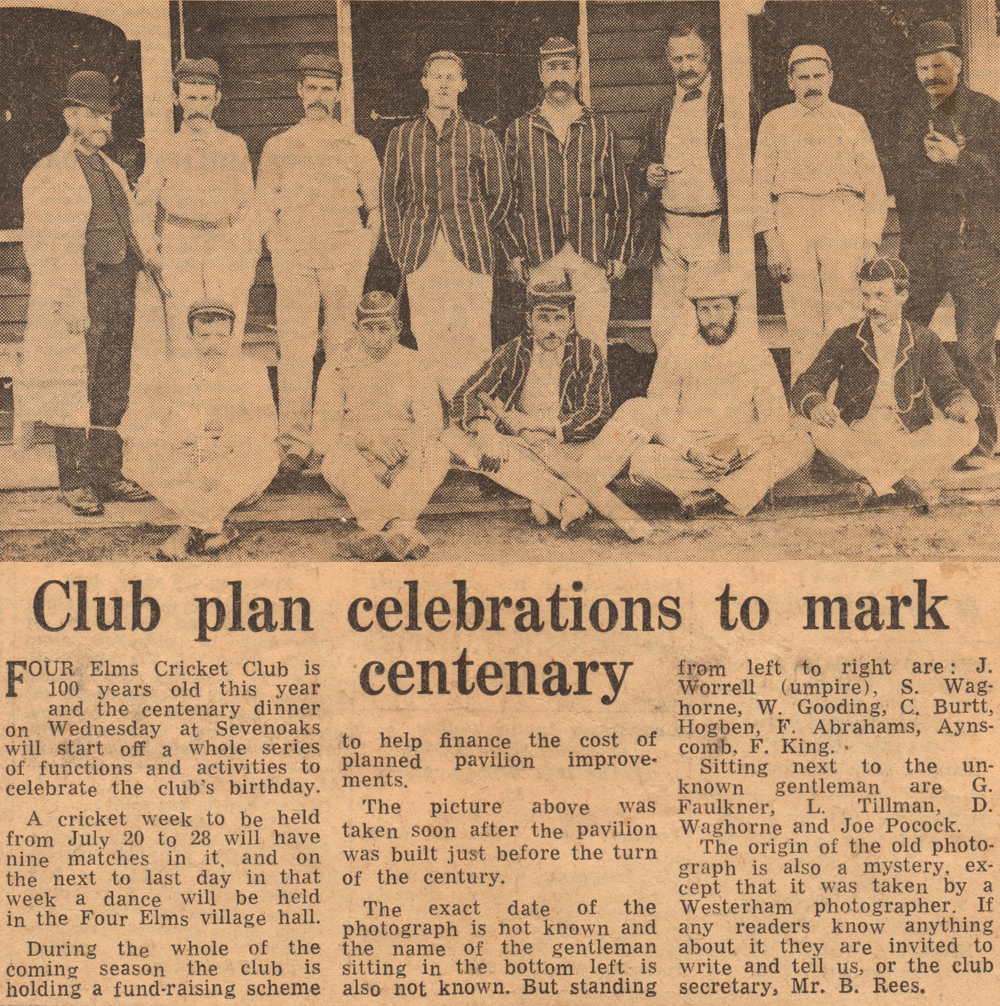 1970 saw Chris and Stephen Tavare debut for Four Elms scoring several fifties. Chris who, ultimately played for Kent, Somerset and England, still serves as a valued Vice President of our club. David Prowse, Peter, Lawrence and Stuart Wilson, Drummond and Duncan Stephens, Keith and Roy Dawes, Peter Smith, David Biggs and Braddy Wells all performed with great aplomb during the 70's. A noticeable change appeared with Four Elms moving from a strong bowling side to an even stronger batting one. Six or seven players performed with the ball consistently but the runs flowed from Messrs Larby, Rylands, Tavare, Stephens and David Silk.

The days of sides being dismissed for less than 100 were seemingly long gone, consistent scores in excess of 160 were becoming the norm. Good batting without a shadow of a doubt but also a sign that the wickets were also performing better and possibly more reliably. By this point a ground committee had taken over the ground preparation duties and many of the players listed would turn up religiously on Thursday and Friday evenings to mow and manually pull the heavy wicket roller.

The team of the 70's and early 80's excelled locally and were renowned for being exciting to watch. In 1989 Four Elms became one of the founding members of The Kent County Village League, breaking away from the established structure. Graham Larby, Lawrence Wilson, Peter Rylands joined by Jeremy Tavare and Guy Spelman, scored stacks of runs, took many wickets and were an absolute pleasure for younger players and spectators to enjoy and learn from.

In the Second Team, albeit no scorebooks remain from this time, the likes of Peter Smith, Colin Trigg, David Biggs, Roy Dawes, Henry Knight et al, were the main stay of the team and were joined by younger members all expertly coached and nurtured by John Bennett and Roy Dawes. Greg Prowse, Alan and Steve Jenner, Stuart Barnes, Richard and Michael Bennett, Tim Seegar, Justin Sharp, Sean Richardson, Ian Killick, Steve and David Fletcher, Bob Richards and many others all plied their trade, supped the occasional half of shandy and dreamed of the first team.

Jon Pike, who is still churning out the overs for the second team, joined the club in the late 70's and made an instant impression both as player, captain and League Chairman. With some excellent connections within the game and a great analytical mind, new players were eased into the club and strengthened an already strong brace of teams on a Saturday culminating with our memorable league win in 1984.

What would players from 1868 make of the club now and ideas for its future? 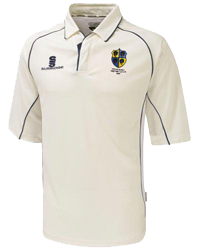 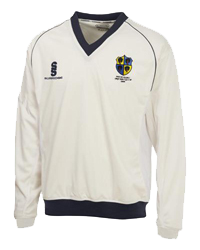 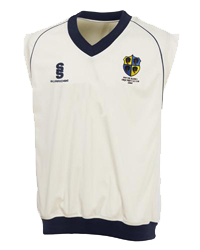 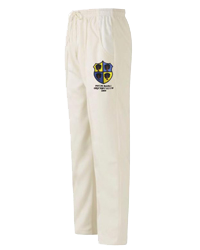 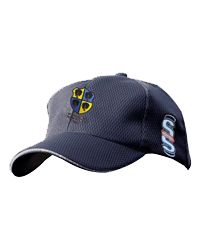 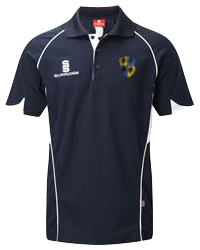 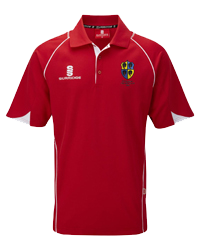 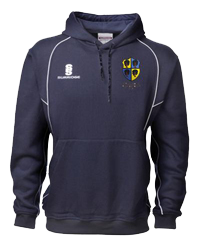 Basic orders come with the club badge and name, but you can also personalise your purchase at extra cost.